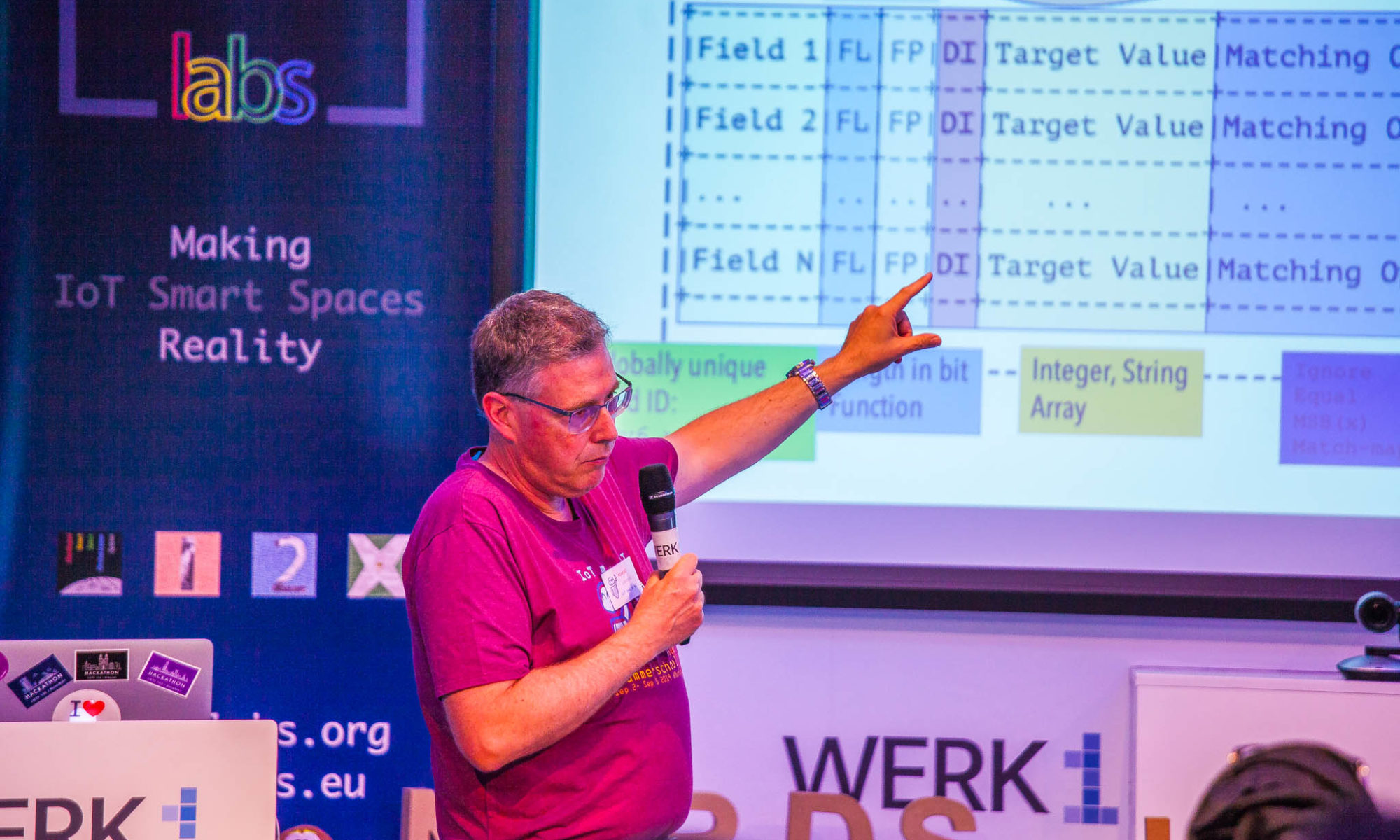 Prof. Dr. Marc-Oliver Pahl heads the Chair of Cybersecurity for Critical Networked Infrastructures (https://cyberni.fr/) at the Technical University IMT Atlantique in Rennes, France. He is an adjunct professor of Carleton University in Canada. He is also heading the IoT Smart Space research team at the Chair for Network Architectures and Services at Technical University of Munich. Marc-Oliver’s research focus is on a holistic approach to cybersecurity. He is an experienced teacher and an eLearning pioneer, holding several teaching awards.

Nicolas Montavont is a full professor at IMT Atlantique, in the SRCD department, and responsible of the IRISA OCIF team since 2015. He received the M.Sc. degree, and PhD degree in Computer science from the University of Strasbourg, France, in 2001 and 2004 respectively. He also did a post-doc at National institute of Standard and Technologies (NIST) in Gaithersburg, USA. Hi received his HDR in 2015 from Université Rennes 1. His research topics during these first years of research were mobility and multihoming management in IPv6 networks. He chaired the Mobile Node with Multiple Interfaces (Monami6) working group at the IETF from 2005 a 2007 and contributed to several standards, with a strong experience in horizontal and vertical handovers. Dr. Nicolas Montavont participated to several national (Cyberté, Remora) projects, as well as European projects (Anemone, Sail). From 2007, Dr. Nicolas Montavont chaired an internal working group at Telecom Bretagne to work on energy efficiency in communication networks. His research topics evolve toward sensors network, smart grids and green communication infrastructure and protocols. His is currently involved in three main projects: interface and network selection algorithm, relaying in ad hoc networking for green and efficient communication and monitoring and control system for building energy consumption.

Sebastian Steinhorst is professor for Embedded Systems and Internet of Things at the Electrical and Computer Engineering Department of TUM. The research of Prof. Steinhorst centers around design methodology and the hardware/software co-design of distributed embedded systems for use in Internet of Things, automotive and smart energy applications.

Prof. Steinhorst studied computer science at Goethe University Frankfurt, Germany. He received his PhD from the same university in 2011. From 2011 to 2016 he worked at the TUM CREATE research center in Singapore where he was leading the Embedded Systems Group as principal investigator (since 2015) and previously held senior research fellow and research fellow positions. From May till September 2016 he was an assistant professor in the Department of Engineering at Aarhus University, Denmark. Sebastian Steinhorst has been a Rudolf Moessbauer tenure track assistant professor at TUM since November 2016 and got promoted to associate professor with tenure in January 2020.

Pierre Bégout is a final year PHD working on Digital Twin in industry for the training of operators.

Paul Emmanuel Brun, Head of the innovation and R&T team at Airbus

Passionate about innovation, cyber security, IoT and identity management, Paul-Emmanuel Brun, is expert in IoT system security within AIRBUS. During the last 10 years, he acquires a strong technical background in cyber security and IoT by contributing to national and European programs in various positions within AIRBUS CyberSecurity, from integrator, to team leader of IoT & Identity and Access Management engineering team. Along his career, Paul-Emmanuel also applied several patents and participated to several conferences. He is now leading the innovation and R&T team in France.

Philippe Coval is a professional OpenSource Engineer, who has been supporting FLOSS communities since late 1990ies. Over decades, he has contributed to many projects from Operating Systems (Debian, Tizen) to IoT frameworks (IoTivity, WebThings) and more.
He also advocated for FLOSS at various occasions (FOSDEM, ELC…), or shared proof of concepts online.
Currently contributing to the Oniro project he is always open for potential cooperation.

Tiago Gasiba has been awarded the Engineering degree in Telecommunications, Electronics and Computers from the Oporto University in 2002. In 2004 he completed his Master of Science in Communications Engineering at the Technical University of Munich. He is currently finalizing his PhD (Dr.rer.nat) at the Universität der Bundeswehr München. Tiago Gasiba has published more than thirty papers on the topics of channel coding and serious games for Cybersecurity in international scientific conferences. He holds several patents in the field of cyber security, and he has more than twenty years of experience in the industry. Tiago Gasiba has been invited as a guest lecturer at the University of Passau, Iscte in Portugal, and UniBW in Germany. In his current role, Tiago Gasiba works as a security trainer and is responsible for several workshops on security awareness and secure software development, as part of his role on secure software enablement at Siemens.

Prabhakaran Kasinathan is a research scientist at Cybersecurity Technology, Siemens AG, Munich, Germany. He is working in the field of IoT security since 2012 and he has published in security conferences such as ACM SIGSAC and ESORICS; and in IoT conferences such as EWSN and WiMob. His current research interests include internet-of-things (IoT) security, blockchain, and cloud security. He works in international and European Union funded projects like “Cyber Security  for Europe” – cybersec4europe.eu and “A Comprehensive Cyber-Intelligence framework for Collaborative Manufacturing Systems” – collabs-project.eu.

Guillaume Neau is a military engineer that graduated from Ensta Bretagne in 2017. He supervised information security qualification operations of the military program “scorpion” before leading the engineering team that designed the digital identity program of France that lead to the renewal of the national identity card from 2018 to 2020. Guillaume worked and advised the French Minister of the interior before moving to AWS in August 2021. He designed the information security strategy for the olympics game of Paris 2024 and contributed in the ellaboration of the Ministry of the interior strategic white paper. At AWS, Guillaume helps public organisations of France think, build and innovate in the Cloud. Guillaume’s main topics are cloud security, infrastructure as code and serverless engineering.

Cora Perner has been with AIRBUS for over six years and leads several research projects. She has completed a PhD in Computer Science from the Technical University of Munich (DE) and a degree in Aerospace Vehicle Design from Cranfield University (UK).
Her research focusses on the intersection between safety and security of unoccupied and autonomous aerial vehicles as well as the safe integration of new technologies and methods. She has been working on several national and European projects in the past years. In addition, she has published seven papers at distinguished international conferences.

Fabian Rhein started at Siemens Corporate Technology (CT) as a PhD candidate in the department of Material Design and Manufacturing Technologies in 2013. After 3 years, he joined the University Relations Department as a strategic consultant and is now shaping Siemens’ global strategic partner programs with universities and research institutes. Inside the Center of Knowledge Interchange (CKI) he is responsible for the TU Munich and for the Principal Partner University KIT and LMU. Further Fabian Rhein is coordinator of the Campus Automation and Digitalization, and the contact person for the Siemens PhD network and the PostDoc@Siemens program.

Santiago Suppan was awarded the grade of Master of Science in business informatics with honors by the University of Regensburg and the Bavarian Elite Network in 2012. In 2018, he finished his doctorate studies (Dr. rer. pol.) within the University of Regensburg and after being granted a doctorate scholarship by Siemens AG Corporate Technology, where he accompanied several funded research projects and researched security in industrial systems, the smart grid, privacy by design and privacy-enhancing technologies in the area of the Internet of Things (focus area), holding academic publications and industry patents. Today, he advices, trains and coaches business units worldwide as a security consultant and as an engagement manager at Siemens AG.

Christian Lübben is a research associate and PhD student at the chair of Network Architectures and Services at Technical University of Munich. Within the Internet of Things (IoT) Smart Space Orchestration (S2O) team his research focus lies on optimizing IoT smart spaces using Artificial Intelligence (AI) based advanced data analytics. The S2O team works on new ways of taming the complexity of the IoT. The goal is making a joint orchestration as simple as writing a smartphone App. Challenges include security, usability, resilience, scalability, and performance.

Laurent Mattlé is the manager of the FabLab at the IMT Atlantique Campus at Rennes.

Olivia Pahl is the coordinator for the PhD Schools of the German-French Academy for the Industry of the Future (GFA) at IMT. Before moving to France she was heading the communications department at the institute for societal development (FGW) in Düsseldorf, Germany.

Laurent Toutain is an associate professor at IMT Atlantique in the SRCD department and member of the OCIF Team (Communicating objects – Future Internet), which focuses on the evolution of Internet protocols and architectures linked to the design of new services (Smart Grid, smart clothes, etc.). After working on IPv6 and transition mechanisms in various environments, he currently focuses on their integration in the Internet of Things, mainly over LPWAN networks. He is the author of several RFCs and reference books on networks.